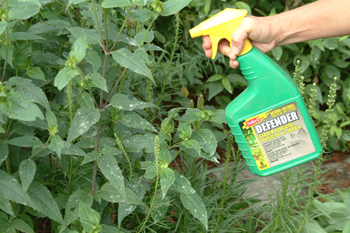 In summer, it’s common to see beloved plants turn from beautiful green foliage to a spotty gray mess. This is caused by a fungus called powdery mildew. We tend to see powdery mildew outbreaks more during years that are humid or damp. Moisture and high humidity (or poor air circulation) are the most favorable conditions for powdery mildew to grow in. Some species of plants are more susceptible to powdery mildew than others, such as phlox, lilacs, bee balm, veronica, lungwort, roses and asters, to name a few.  Many plant breeders have been working feverishly to breed new strains of these plants that are resistant to powdery mildew so keep this in mind before purchasing new plants.

The best control for powdery mildew is to prevent it from occurring in the first place. Be sure to encourage good air circulation between plants by thinning and dividing every couple of years. Shrubs such as roses and lilacs can be pruned in order to maintain an open growth habit. When watering, keep the stream low to the ground focusing on the soil, not the leaves. Try using soaker hoses instead of sprinklers. Powdery Mildew spreads by spores so water drops that splash onto infected leaves cause spores to spray onto healthy foliage, making the problem worse.  When an outbreak does occur, pick off the infected leaves and throw them in the garbage instead of the composter. Garden fungicide sprays such as Defender work to prevent the spread of Powdery Mildew. If the problem reoccurs each year you may want to consider removing the problem plants…or just tell your friends it’s a new silver-leaf variety! â

Engaging and Informative Presentations for Groups