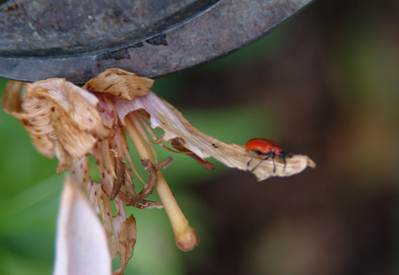 If you have Asiatic lilies in your landscape then you have at some point probably asked yourself ‘What’s eating my Lilies?” I’m sorry to be the bearer of bad news but you have encountered the dreaded Lily Leaf Beetle.  This beetle is a destructive accidental import from Northern Africa and Europe.  It lives the life of luxury spending its days eating and mating without regard for the mess it leaves behind.  Lily Leaf Beetles can desecrate an entire plant in days leaving black gooey gobs of poop in their wake.  If that isn’t enough to make you pass on lunch, the black goo actually is home to the baby lily leaf beetles.  Safely protected in their poop, the larva are virtually untouchable with pesticides making handpicking them the most effective control method.  There has been success with spraying neem oil or insecticidal soap but the adult lily leaf beetles are especially hard to kill in this manner.  Handpick them off and drown them in a bucket of soapy water.  The silver lining to this sad story is that Lily leaf beetles are very particular about their food and are only found on Lilies (Lilium sp), Fritillaria, Lily of the Valley (Convallaria majalis), or Solomon's seal (Polygonatum multiflorum).  Phew!

Engaging and Informative Presentations for Groups